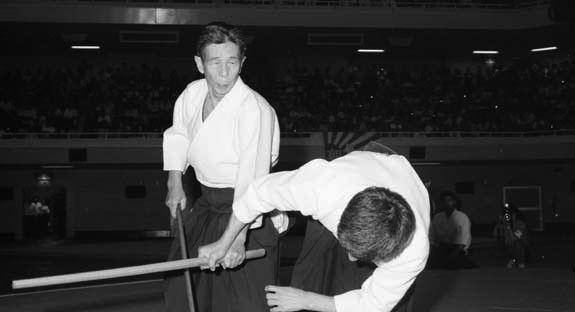 Seigo Yamaguchi was born April 13, 1924 in Fukuoka Prefecture. As a young man he served Japanese Empire in World War II from 1943 to the end of the war. He graduated from Hiroike-gakuen (now University) in March 1946. He also passed the first national senior officer examination of Japanese Government in 1949.

Having been presented to Morihei Ueshiba Sensei ( Ueshiba Sensei : O Sensei) in 1950, he became Uchi-deshi of O Sensei and hereafter he specialized in aikido until the end of his life. As a national mission from July 1958 he officially taught Aikido to Burma; now Myanmar National Army, for two years. It was Japanese national cultural mission but also part of compensation for the formar War.

After coming back to Japan he taught Aikido in the central dojo (Honbu dojo) and other dojos. At the Honbu Dojo he often conducted special seminars for those who are upper graded people. He sometimes gave lectures to the professional Japanese baseball teams. Besides the Honbu dojo, he gave lessons at Universities and other private dojos. Among these dojos, Zoshukan (at Shibuya: Central Southwest part of Tokyo) was the most important private dojo where membership was limited and the surface of the dojo is Floor.

He started to organize seminars from 1977 in Europe, where Paris, Mannheim(Germany), and Oxford were principal places. University of Mannheim established Aikido course and it officially invited him. In 1990 video recordings of his budo were made in Paris, Oxford, Mannheim, and Munich in week-ends seminars. Sometimes Yamaguchi Sensei went to South America such as Brazil, Argentina and Uruguay. He also visited the United States in New York and Hawaii.

Seigo Yamaguchi Shihan passed away January 24 1996 at home although he taught Aikido just two days before at the dojo. The funeral ceremony was organized by his family at Taisoji temple in Shinjuku and more than 1000 people came to the ceremony during two days. Thank you for your kindness for coming. Memorial demonstrations were organized at Kamakura, Meiji University, Nagoya University and Katsuta.