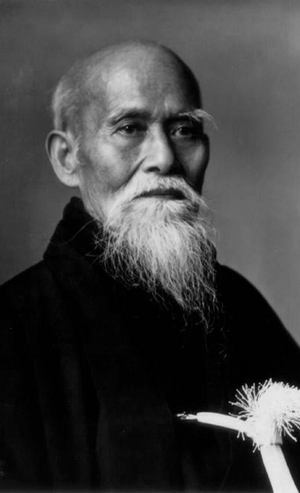 O-Sensei mastered various martial forms including Jiujutsu (unarmed defence), Kenjutsu (sword), and Sojutsu (spear), and was regarded as an invincible martial artist. However, he was also a deeply spiritual man and the duality of victory and defeat, winner and loser, dissatisfied him greatly. Of what value was victory if it came at the expense of another?

Over many years O-Sensei refined his training and introduced a new, non-violent art involving sophisticated grappling, joint locks and throws. In aikido, one blends and harmonizes with an opponent’s ki energy to neutralize their attack, without necessitating the use of physical strength or brute force to defeat or injure them. This new art came to be known as Aikido, which translates as “the Way of Harmony with the Universe”, and is often called the Art of Peace.

Because aikido’s movements are natural and simple, focusing on timing and positioning, rather than on physical strength and size, it is practiced by young and old, male and female alike.

As a martial art, aikido is unique because rather than fostering a spirit of aggression, competition, and clash, aikido asks us to actually enter and find a harmonious way through conflict, not only in our practice, but in our every day life. Thus, aikido transforms the stress of our business, academic, and family lives into opportunities for personal growth and development.